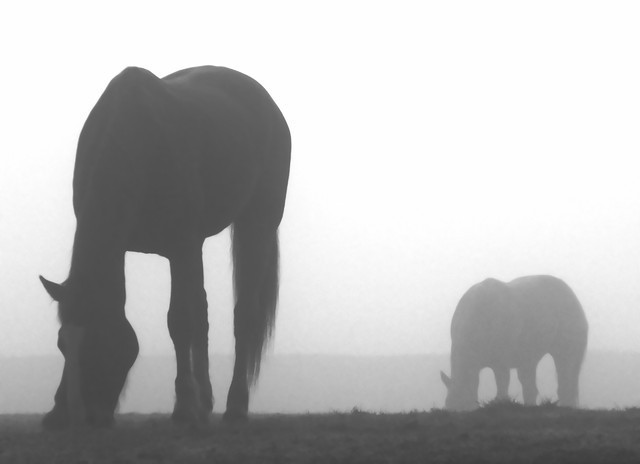 All living species have their genetic diseases; it is a simple fact of nature. We can identify and manage such diseases through their symptoms, but perhaps of more use these days is the ability to work at the genetic level to establish the likelihood of disease, and how to avoid it's perpetuation. In breeding of any sort, whether it be cats, dogs or horses, there is always some physical objective in mind; to produce taller or more refined or steadier-tempered animals. Alongside these concerns there is the weighty responsibility to avoid, and perhaps eventually eradicate, any genetic diseases that we are able to. If a test for a genetic defect is available, it is the breeder's responsibility to test the parent animals before mating, and to act on the results of the tests to avoid producing affected offspring, and continuation of the defect. Scientists have identified more than 13,000 genetically inherited traits in humans, 5,000 of which are diseases or abnormalities. Many of these diseases show a similar genetic pattern across other animal species, so the ongoing work of geneticists in invaluable to all of us who breed Arabian horses. Today's genetic testing enables us to know with certainty if a horse is a carrier of a particular gene; this knowledge allows us to avoid mating with other carriers and prevent the sorrow (and economic loss) that comes with producing an affected foal. The broader scale of such good practice will result in a decreasing number of carriers in the breeding population and a larger, clearer basis for genetic research as more candidate horses become genetically mapped. Total eradication of a genetic disease is not always possible; it might limit the gene pool too much and significant lines would be lost forever. However, we must be as well-informed as possible, whether it be to breed one treasured foal, or for the good of the breed as a whole.

The four most important genetic defects within the Arabian breed are all autosomal recessive conditions. The diseased gene is not sex-linked, and must come from both parents in order to produce an affected foal. These are:

In this article, we will discuss Cerebellar Abiotrophy (CA) and its significance to Arabian breeding today. It follows the same pattern of inheritance as the other diseases listed where:

If an affected horse (with mild symptoms) is used in breeding:

Cerebellar Abiotrophy (CA) is sometimes called Cerebellar Cortical Abiotrophy (CCA) and is a neurological condition. The Purkinje cells of the neurons within the cerebellum of the brain die off and do not regenerate when affected with CA. Once the neurons are atrophied, they are lost permanently and neurological symptoms become apparent. The Purkinje cells have a critical role in the brain, controlling the electrical impulse communications between the inner molecular layer and the outer granular cortical layers of the cerebellum. As the cerebellum is the site of motor control, the physical symptoms are marked anomalies in balance and coordination. Put simply, without Purkinje cells, an animal loses its sense of space and distance making its' movement unpredictable, unsafe and uncoordinated. In most cases the degeneration of the neurons will begin soon after birth and the severity of the condition is determined by the degree of cellular loss. 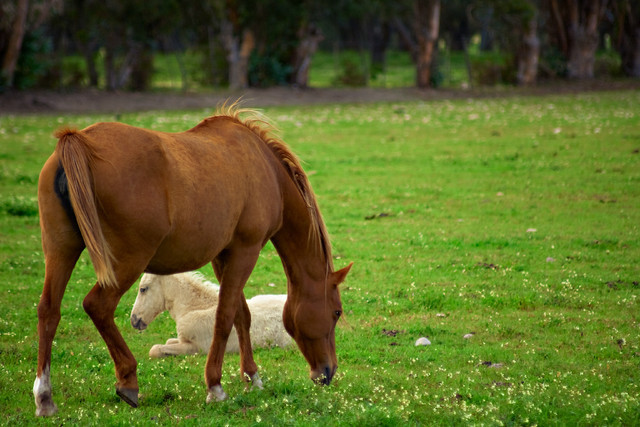 The first clinical signs (symptoms) of a CA affected foal will typically present within the first 4-6 months. The Purkinje cells begin to degenerate about 30 days after birth, the rate of which is subjective. As a result, there is no uniform schedule for the deterioration of motor-function in CA foals. Some foals develop symptoms rapidly and are euthanized. There are cases of horses only developing symptoms between three and six years of age, though they are unusual. CA in itself is not lethal and a few horses have lived to normal life-expectancy. Most are, however, euthanized while juvenile due to complications arising from their accident-prone behaviour. Their coordination is unpredictable and their judgement of distances is poor. They are a danger to themselves and others, unsafe to ride or drive and need intensive and careful management of all aspects of their environment. They do not cope with stress; anxiety exaggerates the symptoms and they startle easily, appearing panicky or hyper-active. CA is often misdiagnosed in foals as their symptoms are accredited to a blow, fall or knock to the head when, in actual fact, the causal relationship lies in the opposite direction. It is clear how the wrong conclusion can be reached when the foal appeared normal at birth and CA is also often misdiagnosed as "wobblers syndrome" or "shivering", Equine Protozoal Myeloencephalitis (EPM) or concussion.

Symptoms of CA are poor balance and an awkward, exaggerated action with the forelimbs ('hyper-metric action') similar to a military goose-step, or a needlessly high elevation used to cross over a very low object. The horse will have a wide stance and an apparent lack of awareness of where the feet are, sometimes standing on, or trying to walk with, a knuckled-over foot. There is a palsy-like head shaking called 'intention tremors' affecting only the head and not the neck or body. The horse will lack a normal blink response although the vision is otherwise correct, and will have poor depth perception and hyper-reactivity to stimulus. Symptoms tend to worsen when the horse tries to concentrate on something or becomes excited or scared. There is a marked tendency to rear up and occasionally fall over backwards when a handler reaches for the halter or pulls abruptly on a lead. When cantering on level ground the horse appears as if cantering uphill, with an exaggerated gait resembling the butterfly stroke in swimming. A CA horse is skeletally sound and the spinal column appears normal. He will not lose weight or show signs of pain, he will not appear lethargic, lose muscle tone or energy levels. All of these symptoms develop and may worsen for six to 12 months after first presentation. If not severe enough to command euthanasia, they gradually stabilize over a period of one or two years. A horse with mild symptoms can live a normal lifespan, but they are often accident-prone and should not be bred from. They often have problems negotiating the simplest of obstacles such as uneven ground. They may run into fences or fall easily, each time risking serious injury. There is some proof that a few affected horses learn to partially compensate for the condition by cognitively learning alternative methods of moving or determining distances. Thus, they appear to improve as they seem less accident-prone, they can even learn to control their levels of activity when anxious. Nevertheless, a constant and forgiving environment is required to house a CA horse; some older sufferers are reported to have another "buddy" horse to act as a guide and support. If a simple test could prevent this sort of a life for a horse, wouldn't we all "opt in" for CA screening?

CA has existed within the Arabian gene pool since the earliest writings of Bedouin tribesmen, and has been recorded fairly comprehensively since the 1840s. In 1967 Max Sponseller conducted a study of "Cerebella Hypoplasia (CH)" using a sample of 21 cases across the United States and Great Britain. The report highlighted the recurring incidence of in-breeding and pointed towards a genetic origin. Soon after, A.C. Palmer carried out an English study (published in 1973) that concurred with the hypothesis of a genetic link, and looked closely at cases of "repetitive close inbreeding". It was not until 1987 that Alexander de Lahunta confirmed the genetic inheritance of the disease. His studies coincided with the extensive research of geneticist Ann Bowling; her work was never were published due to her untimely death, but she proved that CA had an autosomal recessive mode of inheritance. She also posited that the defect was due to a single mutant allele, rather than a combination of several alleles. By this time CA and CH were established as entirely separate problems; CA developing after birth as Purkinje cells degenerate, CH developing during uterine development producing a foal with degenerated Purkinje cells. 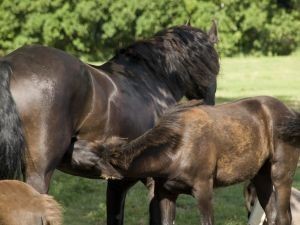 Bret Sponseller (son of the author of the 1967 report) published two in depth CA studies in 1994 and 1995. Around the same time universities in Belgium, Finland and Switzerland cooperated on a report published in Germany by the late H. Gerber, whose son, Vinzenz Gerber, continues the work in partnership with molecular scientist Tosso Leeb of the Horse Genome Project, and Dr. Cecilia Penedo of the University of Davis in California. In 2005, they successfully identified DNA-markers for CA and the "CA Marker Scanning Test" has been available to the public since September 2008.

As an autosomal recessive disease, the defective allele causing CA can be carried over several generations before being discovered through a mating with another carrier and an affected foal being born. (A mating that has a 25% chance of producing a symptomatic foal). The Swiss/German research made "markers" based on their investigations of the Rymnik line (maternal grandsire of Skowronek) in the Crabbet-related, Spanish-related, Egyptian-related and Polish-related bloodlines. It is of course incredibly difficult to establish which horses within the pedigrees were carriers, as only an affected offspring can act as proof of its' parent's carrier status. American geneticists are not in agreement with the focus on Skowronek, although they do agree that his son, Naseem, was a likely carrier, with the Negatiw descendants being particularly vulnerable. Several researchers pinpoint Raffles in their studies, but are adamant that Skowronek himself was CA clear. Their studies and collected markers point further back still, towards Mesaoud and Zobeyni and, more precisely, Astraled and his son Gulastra and subsequent descendants. Dr Penedo is particularly well informed on the Negatiw lines and found that his son Naborr was CA clear. Several Negatiw sons, however, have sired affected foals, among them Salon, Bandos, Tinian, Negor and Wandal. Of course this does not mean that all progeny of these stallions will be affected, nor will all of them be carriers. Another horse suspected by both sets of researchers is the Nazeer-son, Aswan. Nazeer traces to Sotamm 1910 (an Astraled son), as does Morafic who is called into question due to his multiple crosses to this stallion. The Crabbet families have been hit strongly due to their immense numbers and popularity. Bazy Tankersly (Al Marrah) freely discussed her Ataxia foals in one of her early books and initiated the F.O.A.L (The Arabian FOAL Association) programme for reporting such genetic conditions. It is partly thanks to her responsible breeding that we have fewer CA affected foals in the Crabbet lines than we may otherwise have had. Numerous studies have looked into the Spanish Arabian bloodlines. They all seem to conclude that Nana-Sahib is the principle horse to be mindful of, as well as the offspring of Razada; sons Kashmir and Ifni; and daughters Teutonica, Katiuska and Moramya (also registred as Moramya II). There is hardly a classical pure Spanish pedigree that does not carry multiple crosses to one of more of these horses.

CA is incurable. The only hope for prevention and management of this disease lies in identifying carriers and selectively breeding away from the disease. The CA status of the horses in your paddocks is unknown unless they (or both parents) have been tested. The responsible approach is to test your horses and to use the knowledge of their results when breeding. It is a simple test, requiring only a hair follicle sample, and kits are available through the University of California laboratory: www.vgl.ucdavis.edu/services/horse.php or the Van Haeringen laboratory: www.vhlgenetics.com/vhl/webtable.php

A comprehensive and ongoing list of the CA-status of horses can be found at http://www.cerebellar-abiotrophy.org. If you wish to include your own horse's results in the list please email: gsarrow@wildblue.net