The Daily News Sponsor for today is Vote and Win, a brand new entertainment experience making its debut at the All Nations Cup in Aachen. I sat down with Heinz Karl Stockle, a member of the ANC organizers and the brainchild of this exciting new plan that uses cutting edge technology to engage viewers around the world. “The idea is create an opportunity for viewers to participate in the event and to voice their opinions about the horses, as well as the judges. I encourage everyone to visit the website to learn more about the program and to register to participate.”

According to the “Vote and Win” website, “The ANC organizing team developed an idea to involve more people at the show, make the show more attractive to many people and try to be more transparent. Therefore, a new online system called, "Vote and Win,“ was developed, which can be used for different activities. Everybody who wants to participate and give their vote, needs to be registered first - including a copy of their passport – to avoid double registrations and to make sure everybody can give only one vote.

This year, Aachen will offer a Jackpot to the voters totaling 14.000 €. The voters can enter their choices of Gold, Silver and Bronze winners during the seven championship classes. The voters who have the same choice as the judges, will receive the amount of 2,000 € per Championship to share among them. The votes do not have any influence on the show result and will be made public only after the judges have given their choices. The Jackpot money is offered by a sponsor.

The idea is to attract more people, even without attending the show, and also to learn the public’s opinion. Often we hear rumors about why some judges are invited to a show, or not. The organizers thought it would be very interesting to let the audience give their opinion on the choice of judges. After the last championship, we will publish the nine judges with the most viewer votes. This information is only for the All Nations Cup Committee for future choices of judging panels. It is not meant to discredit anybody, but to let the public give their opinion about their favorite judges. We believe it is very important to get the public’s opinion and also to let the people have some influence. This is actually called democracy! But to make it clear again: the result of the public voting will not affect the selection of the judges for the next year. The judges will be chosen by the ANC Committee.

The organizing team of ANC is trying to offer some new ideas to improve the show, to make it more interesting and attractive to the audience and to let people be a part of the show, even though they are not judges or officials, do not have any horses, or cannot afford to show them in our system. We need new ideas to change for the better. This new system is not affecting the results or the show itself. It is only an additional entertainment system. We would be more than happy to see all of you in Aachen for a new experience and further developments.”

And so it all begins… I love going to a show during the setting up phase. The energy and activities are fast paced and the transformation of the area seems almost magical. Although, it probably is not so magical for all the hard-working people who actually do the set ups – they work endless hours creating  beautiful environments for their clients and guests to enjoy. Here in Aachen, you can see people really take pride in the design of their spaces and use their creativity to create beautiful and comfortable areas for entertainment. Again, this is where the European sense of style really shines – the booths are very modern, colorful, elegant and each uniquely shows the style and character of the farm.

More people were arriving today and the atmosphere was very congenial. I met up with friends from home, Bob and Janene Boggs of Midwest Station I in Osseo, Minnesota, and also Belgian friends, James and Christel Swaenepoel, and Heinz Stoekle from Germany, who were discussing the new “Vote and Win” program. Both Bob and James are Board Members of the AHBA and the Arabian Breeders World Cup in Las  Vegas and they were excited about this new technology and the possibilities it presents. “I think it’s an absolutely ingenious idea,” stated Bob Boggs. “I love the idea to involve breeders and owners and viewers around the world and give them the opportunity to actually participate in the show. Janene and I are both registered and we are really looking forward to enjoying the process.”

James Swaenepoel offered his thoughts, “This is the first opportunity to offer audience participation to viewers around the world. First, everyone must register at voteandwin.org in order to participate. This creates a fair playing field and eliminates duplicate votes. Some of the goals of this program are to encourage viewer participation, to encourage transparency in judging, to gain the public’s opinion regarding the judges at the show and other aspects of the event. I think it’s a really positive step for the show and people will really enjoy it.”

The show begins on Friday morning, so be sure to visit and register to vote at www.voteandwin.org and watch the live feed of the show at www.iequine.com 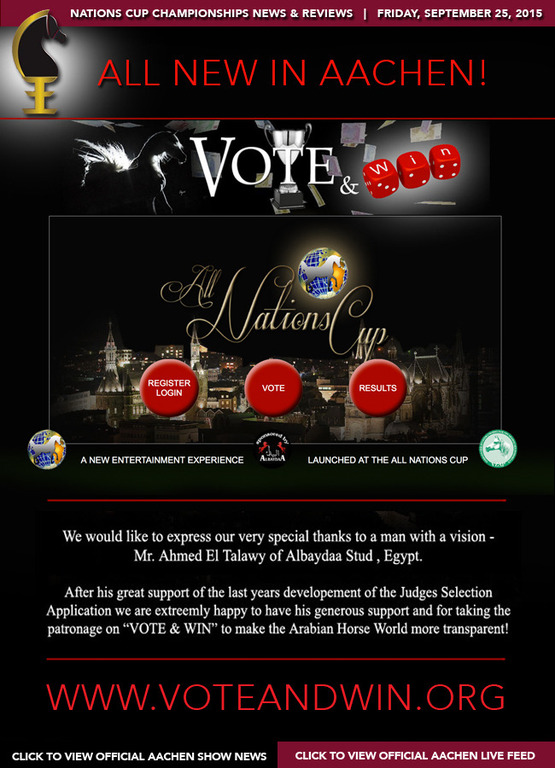