When Bay-Abi was a Weanling

This is a very rare photo of Bay-Abi as a weanling in 1957. Bred by Lloyd and Mary Silva of Gold Hill, Oregon, Bay-Abi would later have a date with destiny when he was consigned in 1959 by Dr. Wes Hoskins to the first Arabian sale ever to be held at San Francisco's Cow Palace. A young Sheila Varian and her mother Wenonah decided to go take a look after viewing the sales catalogue, with a particular interest in seeing this young Polish colt. But when she got to his stall, she and Bay-Abi shared a moment that transcended pedigrees. "Bay-Abi looked me in the eye, and that was it for me," says Sheila. She purchased him for $1,100 that day. "I would give anything to see the sale agreement today, because one thing I do remember clearly was trying to sign my name with a hand shaking so violently." Bay-Abi would later win U.S. National Champion Stallion in 1962 with Sheila – a relatively unknown handler at the time – at the lead, and then become one of the breed's most influential sires... namely Bay El Bey, who sire greats such as Bey Shah, Huckleberry Bey and Barbary, and can be found in the blood of over 70% of today's registered Arabians. And it all started with this weanling below. ‪#‎GreatMoments‬ ‪#‎BayAbi‬ 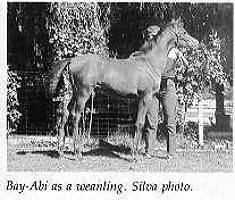