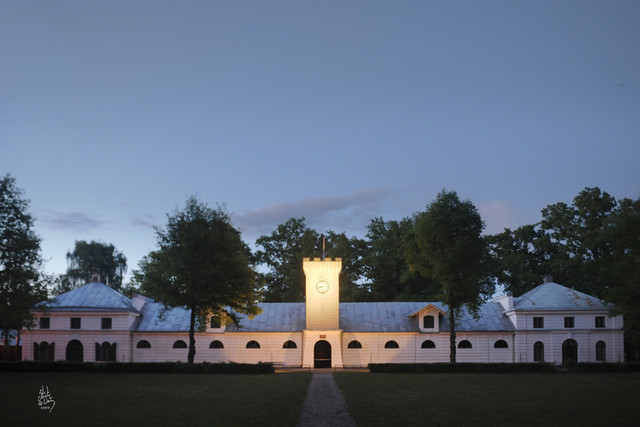 The name evokes historical significance, achievement in the arts and sciences, struggle and tragedy, vision and triumph - devout, resolute, inspirational and revolutionary - a country and a people inextricably linked to the destiny of civilization for the past millennium.  To the equine world, Poland is more than just a pivotal country in Central Europe - it is an essential entity in the history of the horse, a nation of accomplished horsemen and horsewomen whose profound influence and extensive impact resounds with significance around the globe.  The Arabian horse is the epicentre of all things equine in Poland - for nearly seven centuries, the Arabian horse has been bred with vision and foresight by Polish horsemen of legendary acclaim. The incomparable list of accomplishments profess the profound reality - nowhere outside the homeland has the Arabian horse thrived nor achieved the level of fame and influence as it has in Poland.  This fame and influence is celebrated in world-class style each August during Polish Arabian Horse Days. Passionate and dedicated breeders and enthusiasts from around the world make the annual pilgrimage for this five-day event, which includes the Polish National Show, Breeding Tours at each of the State Studs, and the marquee event: the Pride of Poland auction.

Another milestone achievement will be celebrated in 2009, with the Pride of Poland Auction commemorating its 40th anniversary. Many of the most legendary Arabians of the last half-century have graced the auction stage in Janow Podlaski - legacy sire BANDOS (1983), ethereal World Champion PILARKA (1990), and the unforgettable reigning World Champion KWESTURA, who shattered the record breaking price in 2008 at an astonishing 1.125 million Euro. The Pride of Poland is still the single best opportunity in the world to buy the most accomplished mares and stallions with centuries of proven genetics. From the seasoned veteran to the future star - there is something for everyone in the annual Pride of Poland collection.  For the last several years, the main attraction in the Pride of Poland has been a daughter of legendary international sire of significance MONOGRAMM - globally acclaimed beauties such as PALESTYNA, ELANDRA, EKSCELLA, ESKALOPKA, GEHENNA and KWESTURA have raised the standard and expectation of excellence each year. In 2009, the torch bearer for the MONOGRAMM legacy is FALLADA, a quintessential Michalow superstar who has achieved worldwide at the highest level as Polish & Canadian National Champion as well as World Reserve Champion Mare. Most like KWESTURA in overall style, FALLADA is an exotically typey and superbly constructed mare with the captivating charisma, enchanting presence and trademark lofty and dynamic trot expected in the most elite Michalow-bred daughters of MONOGRAMM. The "P" family of Janow Podlaski is widely acclaimed as one of the most reliable and most prolific dam families in the breed, having produced the greatest number of international winners and successful breeding horses for the stud. Many of the superstars from auctions past have been members of this dam line, including PILARKA, PIETA and PENICYLINA. The promising young mare PINTA, out of Polish National Champion PILAR, represents the best of the "P" tradition for her maternal stud in the 2009 collection. A former Polish National Reserve Champion Junior Mare, PINTA is a classic daughter of undefeated Triple Crown winner EKSTERN, complete with extreme type, superb balance, an exuberant attitude and a show-stopping trot.

The youngest of the State Studs, Bialka, has often understatedly stolen the spotlight at the Pride of Poland with some of its finest in years past. Unforgettable broodmares and accomplished show horses such as MAESTA, HULA, EUSKARA, FRASKATA, HEROLDIA and ELZUNIA have found good fortune with aspiring breeders around the world after passing through the auction. This year, Bialka adds EMIKA to this list of distinction, a mare greatly admired and desired by many of the most astute and accomplished international Arabian horse breeders. Also a former Polish National Reserve Champion and winner of the European stage, EMIKA is beloved for her superlative construction, classic type and charm, and her incredibly powerful trot, with its exceptional length of stride and strength of suspension.

Several other mares of both promise and distinction bolster what is expected to be one of the best Pride of Poland offerings ever. Three daughters of pivotal Polish sire GAZAL AL SHAQAB are amongst the 2009 elite, as are daughters of international champions EMIGRANT, ELDON, EKSTERN, ARARAT, PIAFF, METROPOLIS NA, PILOT, PESAL & ETOGRAM. Amongst these, expect to find some of the brightest stars of the future in both the show ring and the breeding barn.  Expectations and excitement will be at their most intense for the most unique offer ever in the history of the Pride of Poland: the opportunity to purchase an offspring right to the most universally admired and desired Arabian mare in the world - PIANISSIMA. Her ultra-exotic type, quality and refinement are without equal - smooth, elegant and superbly conformed, PIANISSIMA has the raised the international standard of perfection to its highest level in the modern era. Her show record is unparalleled as well - PIANISSIMA is the only mare to have been undefeated in the European show ring as World Champion, European Champion, All Nations Cup Champion & Polish National Champion / Best in Show. Incredibly, she accomplished this feat twice - as both a junior and senior mare. In North America, PIANISSIMA was rewarded with the title of US National Champion Junior Mare to thunderous approval and a spontaneous standing ovation. This unprecedented opportunity within the Pride of Poland is a breeders dream fully realized - to share in the collaborative process of creating the next generation of excellence utilizing the most well respected, proven genetics and the most iconic phenotype available in the Arabian breed today: the pinnacle of perfection - PIANISSIMA.

The companion Selection Sale (former Silent Sale) has had its fair share of success in the past as well. Legendary performers and international sires of influence WIKING and EL GHAZI were both Silent Sale purchases under $30,000 each. Discerning buyers from around the globe know that there are always a handful of hidden gems to be found each year.

Since 1979, the Polish National Show has showcased the finest of the Polish breeding program in conjunction with the annual auction. World renowned for its extraordinarily high calibre of excellence, the Polish National Show is a three day celebration of magnificent mares, charismatic stallions, captivating fillies and promising colts. Under the brilliance of the late summer sun, many of the greatest show horses of the last quarter century first found fame within the overwhelmingly enthusiastic show paddock of Janow Podlaski. Reigning European Triple Crown winner and show goddess supreme PIANISSIMA completed her domination of the Polish show ring on home turf in 2008 by not only unanimously capturing the title of Polish National Senior Champion Mare, but also be becoming the only horse ever to be twice named Best in Show at the Polish Nationals. Expect the same level of excitement and world-class quality in 2009, as many of the past superstars return to compete for one of the most coveted and well respected titles in the Arabian horse world: Polish National Champion.    The tradition of excellence that defines Poland is most fully realized during the Breeding Parades at each of the State Studs. The depth and breadth of quality within the broodmare bands is truly astounding - to enjoy generations of success in one visit is the privilege of a lifetime. Walking amongst the mares and foals, reaching out to stroke an admired stallion, turning the corner in the spacious, improbably peaceful stables to discover a beloved old friend or a "take-your-breath-away" icon, the omniscient serenity in the soft dark eyes of the venerated matron, the effervescent energy of the young filly with a destiny of greatness to fulfill - these are the moments that forever change you, moments that inspire you to be and to do more... It is our distinct pleasure to invite you to attend Polish Arabian Horse Days 2009. It is both an honour and a privilege for the State Studs of Poland - Janow Podlaski, Michalow & Bialka - the Polish Agricultural Property Agency and Polturf to share the best that Poland has to offer with you each August. Be a part of it all - embrace the history and the tradition, delight in the spectacle and pageantry, enjoy the camaraderie and fellowship, share in the excitement and the significance of standard-setting events as they unfold.  Expect excellence - expect the experience of a lifetime.