Arabian horse enthusiasts have been known to travel the world in search of their dream horse. This April, a group of intrepid travellers made their way to the charming little town of Santa Ynez, California, to visit some of the most important breeding farms in the world.

From Tuesday 21 April 21 to Friday 24 April, members of the Santa Ynez Valley Arabian Horse Association hosted open houses and made special presentations of their world famous horses – all for the enjoyment and edification of those who attended.

According to the Santa Ynez Valley Arabian Horse Association’s website, the group originally began as an Arabian Breeders club over 30 years ago. For decades, the historic valley was the Mecca of our industry and home to more National Champions than any other area in the United States.

Over the past 30 years, some of these highly regarded breeders and their farms have passed from our lives. However, several of these well established farms still remain and continue to thrive. Meanwhile, several newer breeders have joined the Santa Ynez Valley community, bringing vitality and renewed excitement to the area. The breathtaking beauty of the land, the serene pastoral settings, the quaint little town, the rich history and culture of the people, but most of all, the beautiful Arabian horses, continue to draw us to this valley.

The Santa Ynez Arabian Breeders Celebration began on Tuesday afternoon at Aljassimya Farm, owned by Sheikh Jassim Bin Khalifa Al Thani. The breathtaking natural beauty of this incredible farm was matched by that of the horses presented to their guests.

The Aljassimya presentation included breeding mares and their foals born this year. The farm employed the services of several highly decorated and internationally respected sires. Among the first to be presented was a lovely filly sired by US National Champion Stallion Aria Impresario (Marwan Al Shaqab x GC Echlectica). Next, one filly and one colt, both sired by Om El Bellissimo (Om El Shahmaan x Om El Benedict), were shown to the delight of the crowd. These were followed by a lovely filly sired by Monther Al Nasser (Ansata Hejazi x Aliah Al Nasser).

The next group of horse were sons and daughters of WH Justice (Magnum Psyche x Vona Sher-Renea). Aljassimya Farm leased WH Justice and brought him to Santa Ynez with the purpose of establishing a foundation for their programme with his daughters, which were bred at the farm. The Justice foals ranged in age from several months to several weeks. The older foals were very confident and precocious, while the youngest stayed close to the mares side. It was wonderful to see how carefully the Aljassimya staff handled the mares and babies and allowed them to be natural and at ease. Bart Van Buggenhout and Debra Schliem, as well as the entire staff at Aljassimya, are to be congratulated for the exceptional teamwork that was evident at this open house.

Later that evening, Aljassimya hosted a delicious dinner for all of the attendees; it was the perfect end to a perfect day.

Wednesday’s farm tours began with a morning visit to Day Dream Arabians, owned by Carole Steppe, a dedicated breeder for more than 20 years.

Mares and foals were the next group presented. These included Carol’s 2015 foals sired by WH Justice and out of daughters from her stallions. We also saw a lovely WH Justice weanling filly out of an Eden C (Enzo x Silken Sable) daughter. These fantastic foals are the next generation of greatness for Day Dream Arabians.

The Santa Ynez Valley is one of the most special places I have ever been. There is something divinely peaceful in this place. You feel it deep inside. Earth meets heaven here and it is the perfect setting for the Arabian horses of Om El Arab International, owned by Sigi Siller and her daughter, Janina Merz. The garden party atmosphere with soft music, wine from the Om El Arab vineyard and delicious snacks encouraged conversations among the eclectic group of guests, many of whom were international.

We first saw the senior stallions: Om El Shahmaan (Sanadik El Shaklan x Om El Shaina), Om El Bellissimo, Om El Al Azeem (Al Lahab x Om El Beneera). Then the younger stallions and colts were presented followed by ZT Magnanimus (AB Magnum x ZT Shakmontelite), a client-owned stallion. The horses presented were primarily Om El bred. However, among the pedigrees we saw the names of stallions that Sigi had incorporated into her programme including the straight Egyptian stallion Al Lahab (Laheeb x The Vision HG) and the champion maker, WH Justice. The results of crossing these stallions on Om El Arab’s world famous mares have been incredibly successful as seen in their exquisite foals, that were also presented.

In addition, there was cake! A very yummy carrot cake was served to celebrate the 30th birthday of Estopasan (Rastano), a direct son of Om El Arab’s foundation mare, Estopa (Tabal x Uyaima). It was a wonderful day to remember.

Gallún Farms has partnered with Aljassimya Farm, whose show horses were also included in the presentation. Aljassimya manager, Bart Van Buggenhout, shared their accomplishments and future plans. For many, the climax of the morning was seeing the incredible mares CR Jasmeenah (WH Justice x Fforget Me Not) and NW Siena Psyche (Padrons Psyche x NV Shanteuse). CR Jasmeenah is a World Champion and US National Champion Mare, while NW Siena Psyche is a multiple National Champion Mare and dam of five national champions. It truly was a once in a lifetime experience to see these mares and stallions.

The Santa Ynez Valley farm tour continued on Thursday afternoon with lunch and a presentation of horses at Silver Maple Farm, owned by Christie and Henry Metz. Silver Maple Farm is the only farm in the valley that breeds straight Egyptian Arabians. The Metzs began breeding Arabians more than 25 years ago. Over that time, they have established strong families that represent generations of their programme. The presentation was also a party for their stallion, Ali Saroukh (Ruminaja Ali x Glorietasayonaara), who was celebrating his 21st birthday. The group of horses shown included Ali Saroukh, his sons and daughters and his grandchildren.

They were presented in family groups and Christie Metz explained all of their family connections and accomplishments. In addition, Christie shared personal stories about the horses. I feel this showed her deep personal connection to their horses – these are not just valuable commodities, they are cherished members of the Silver Maple Farm family.

The final day of the farm tour was Friday and we all gathered at the beautiful farm of Haras de Cardenas, owned by Gilbert and Jennie de Cárdenas. The open house was hosted by Joaquin Bin, Breeding Director, and Tiffany Schmidt, Farm Manager.

The star of the presentation was Polish National Champion Stallion Ecaho (Pepton x Etruria). This stallion is a gentleman and an ambassador for the breed with his white satin coat, huge black eyes and gentle, charming nature. Ecaho offspring were shown as well as two foals sired by QR Marc (Marwan Al Shaqab x Swete Dreams) and out of Polish-bred mares.

Then it was time to leave; it was bittersweet. We had to say goodbye to the breeders and beautiful horses of Santa Ynez. Be sure to save the date for next year and join us to see the next generation of champions. Or don’t wait – just call and make an appointment to visit one of the farms. It’s always a great idea to visit Santa Ynez – anytime of the year! 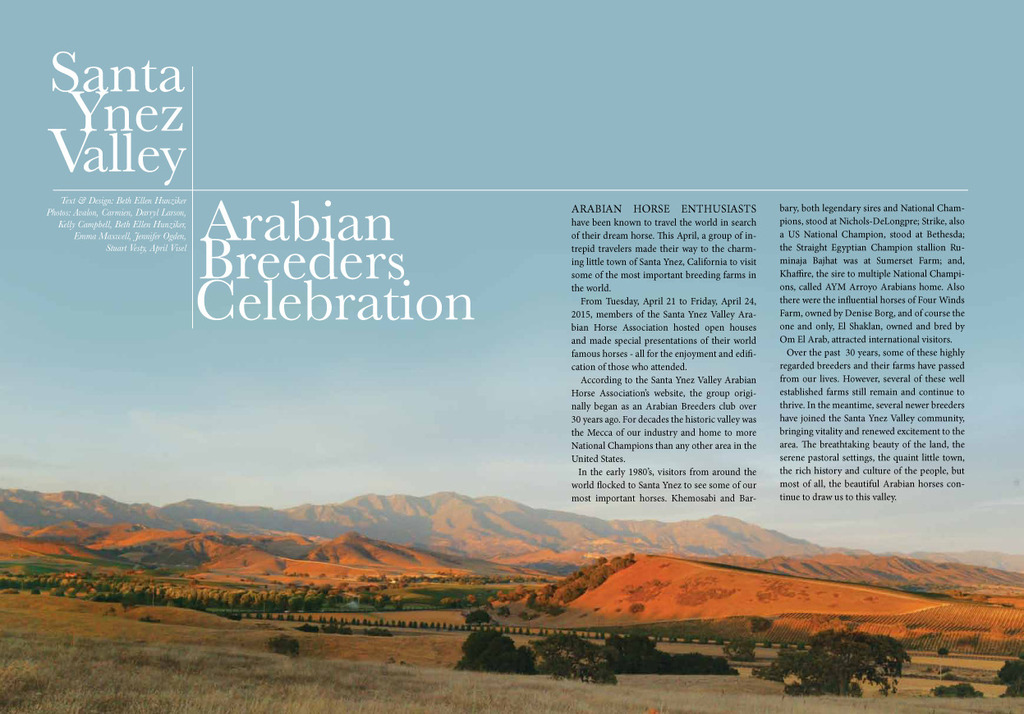 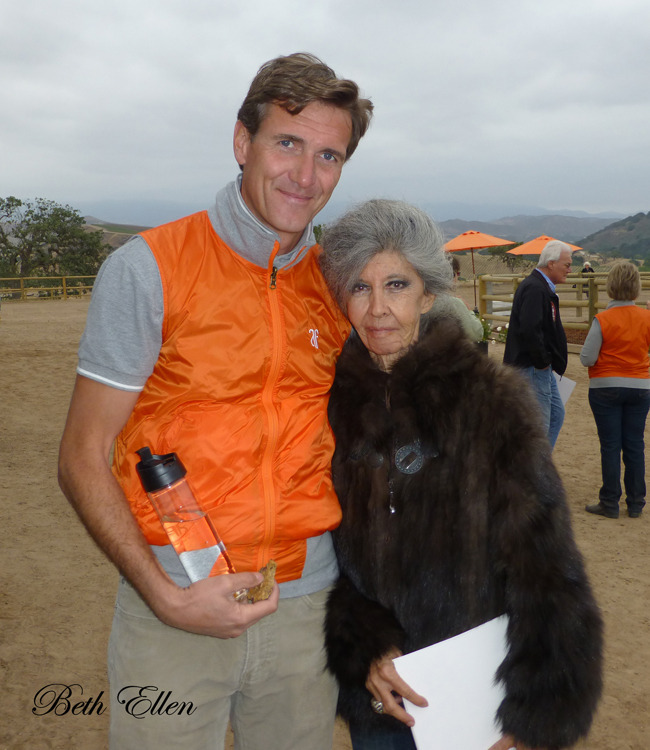 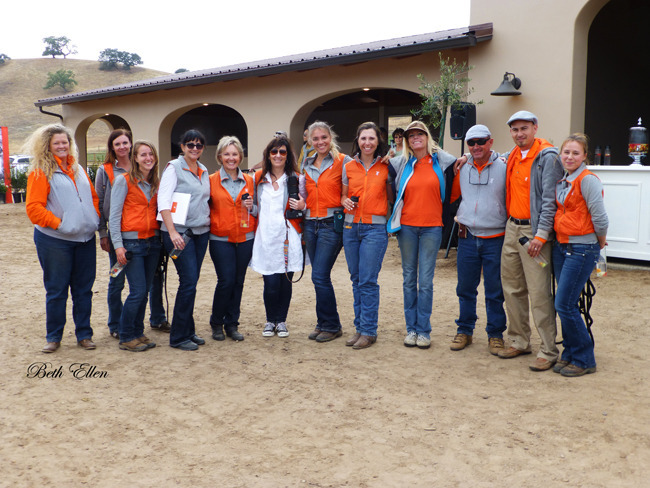 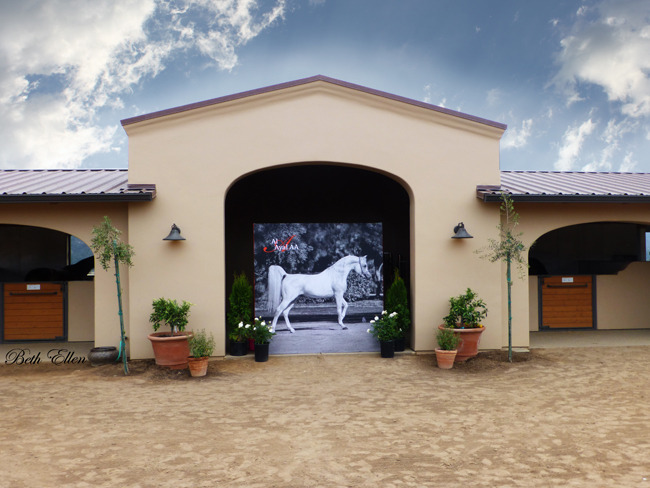 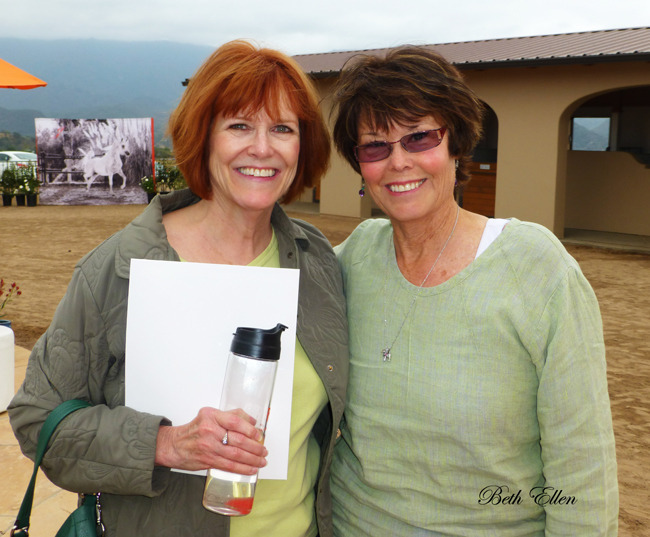 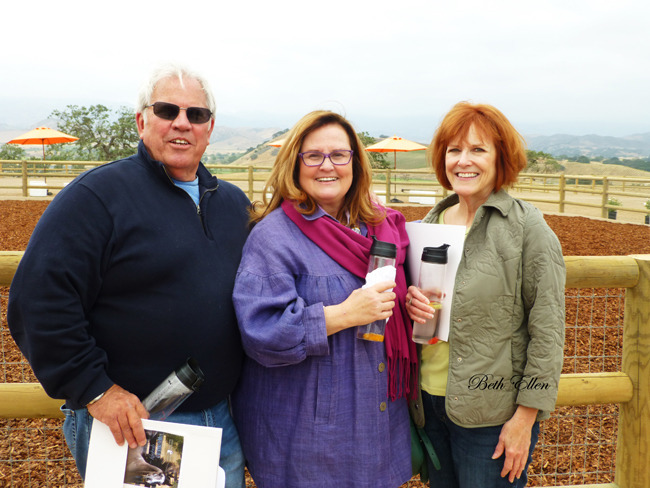 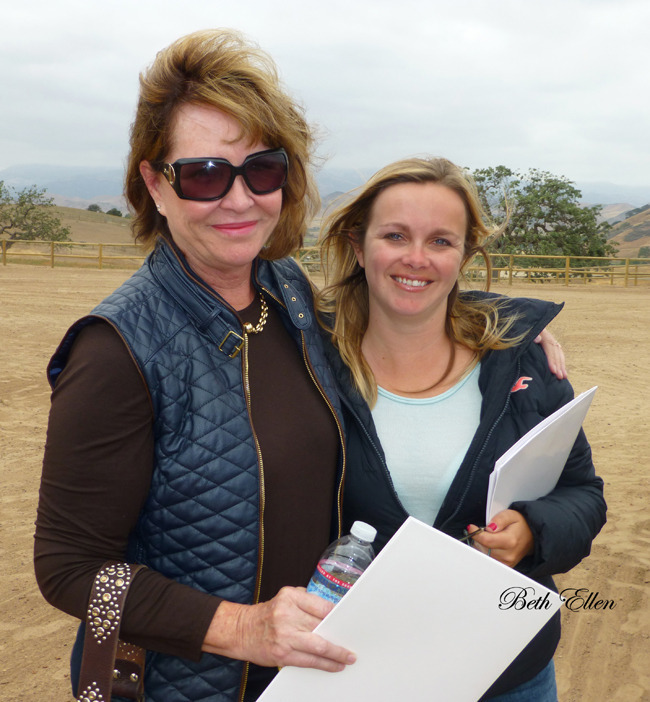 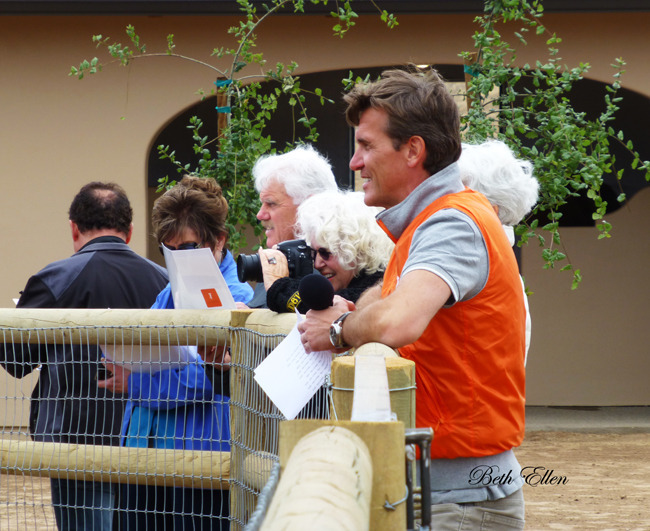 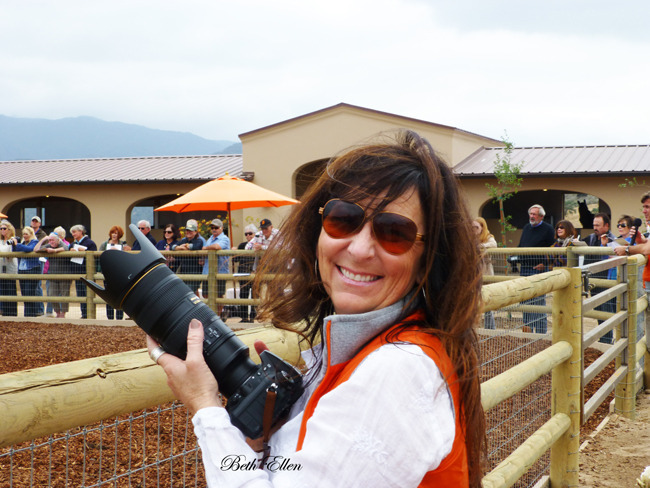 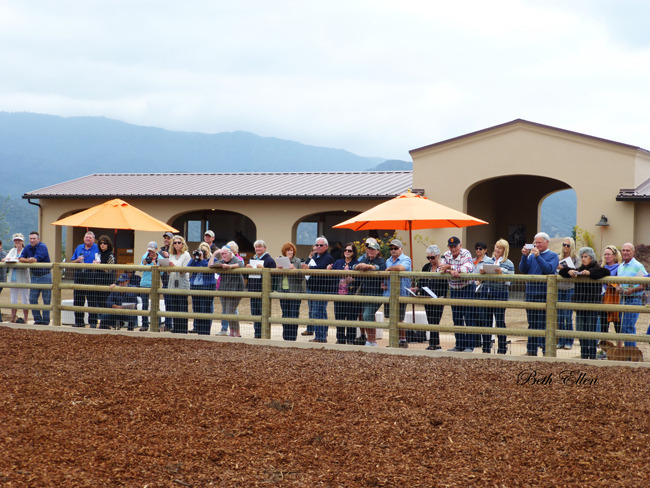 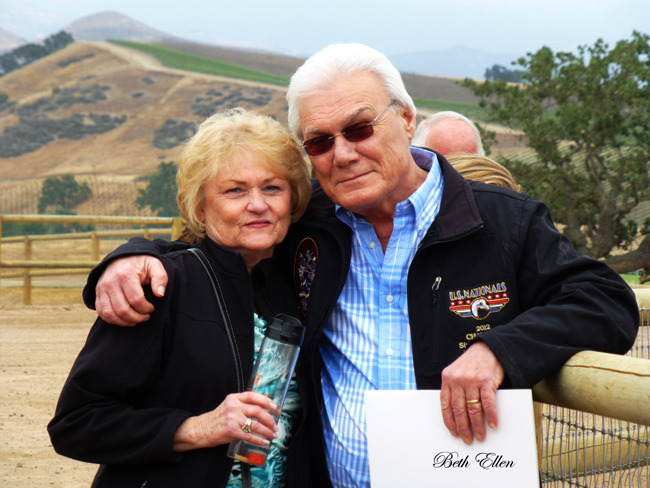 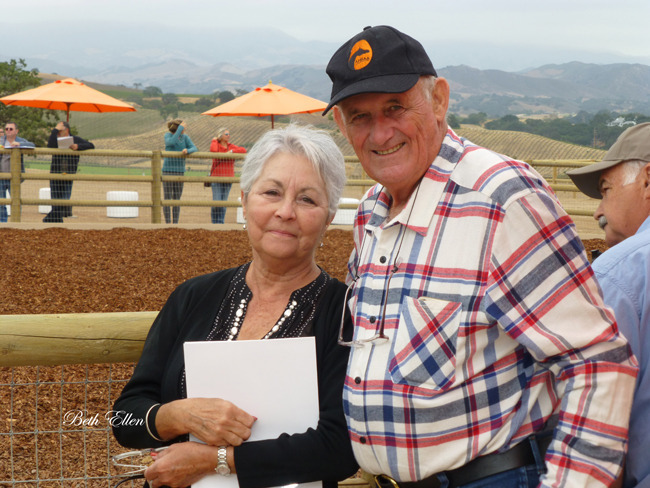 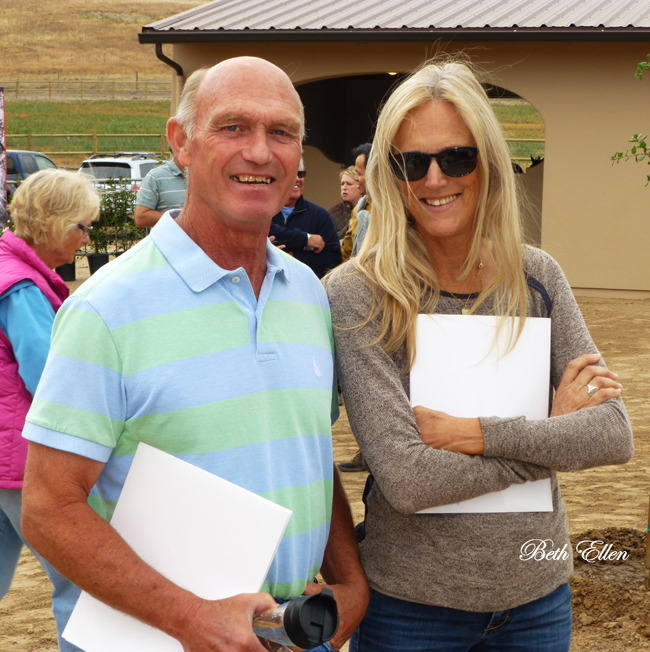 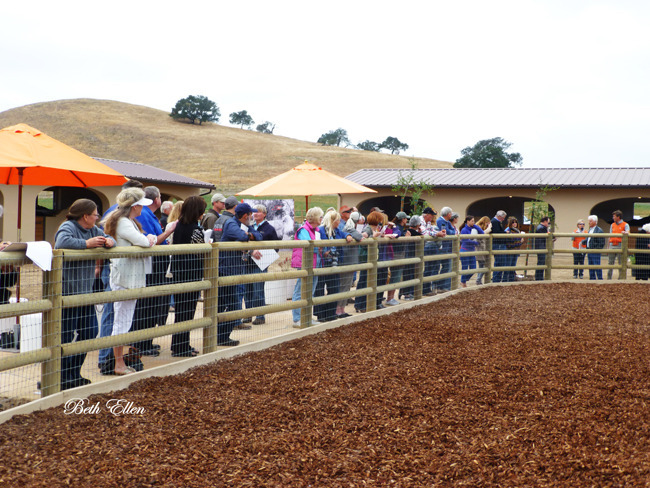 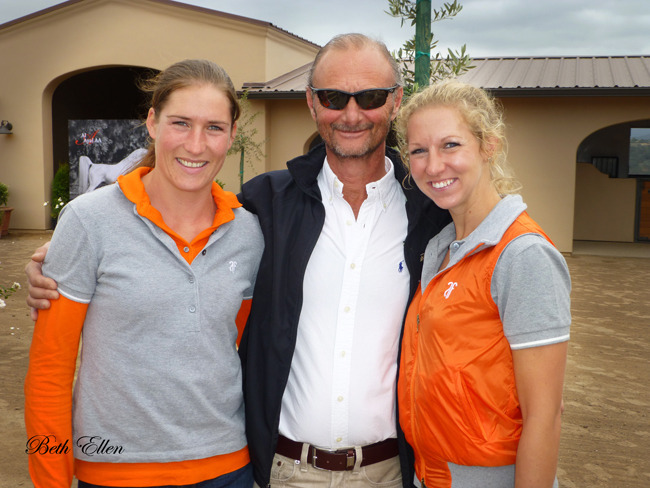