The Al Khalediah Arabian Horse Show opened its doors on the 15th of January 2008 for four consecutive days in the headquarters of HRH Prince Khaled bin Sultan bin Abdul Aziz Al Saud's farms in Tebrak city, in the Kingdom of Saudi Arabia.

This Festival encompassed a various number of activities that aimed to restore equestrian disciplines and the importance and significance of the Arabian Horse as part of the nation's history. 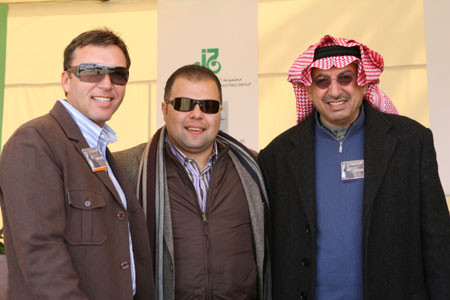 There was an auction of exceptional Purebred Arabian Horses on the first day; a racing display of Arabian racehorses on the second; while the final two days showcased the pinnacle of the Festival, a two day International Arabian Horse Show displaying the true beauty and elegance of these majestic animals.

This event is considered the only one of its kind in the Arabian Peninsula and, more particularly, in the Kingdom of Saudi Arabia. It was a very enjoyable event for us and all that attended.

The Kingdom of Saudi Arabia is the largest country on the Arabian Peninsula. It is bordered by Jordan on the northwest, Iraq on the north and northeast, Kuwait, Qatar, Bahrain, and the United Arab Emirates on the east, Oman on the southeast, and Yemen on the south, with the Persian Gulf to its northeast and the Red Sea to its west. It has an estimated population of 27.5 million, and its size is approximately 2,150,000 square km (830,000 square miles).